This park is only 10 minutes away from the city centre, in the upper part of Massa Marittima just outside the medieval walls. It is a pedestrian area and is very well suited for nice walks, also thanks to the presence of playgrounds for children. The park includes a sports centre with tennis courts, a football stadium and a multifunctional indoor sports hall. The weekly market takes place every Wednesday morning along the two main roads.
A small side lane leads to a sightseeing terrace, giving you a beautiful view of Massa Marittima from above. There, a marble sculpture was erected in 1964: it is a memorial to the victims of Niccioleta during the Second World War. 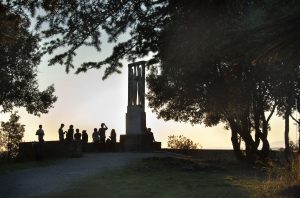 On the 13th June 1944 a group of Nazis and Fascist soldiers broke into the mining village of Niccioleta, about 8km far from Massa Marittima. 6 miners were shot and killed on the spot while another 150 were transferred to Castelnuovo Val di Cecina. The following day 77 more people were killed on the way to Larderello, bringing the total amount of deaths to 83.