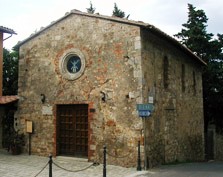 The Church was built at the end of the XV century but at the beginning of the XVIII c. it was used as stables; afterwards the building was abandoned until it was renovated in 1970 and became the headquarter of Borgo, one of the three medieval neighborhoods in Massa Marittima.

The structure is very simple: it has a squared base, with a hut shaped façade and a rose window with the Borgo crest.